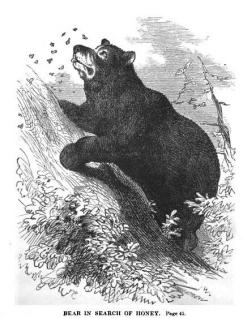 While on his way to the Lonely Mountain to burgle the hoard of the great dragon Smaug, Bilbo Baggins, hero of J.R.R. Tolkien’s 1937 novel The Hobbit, encounters the wild but benevolent Beorn, a “skin-changer” who divides his time between the man and bear forms he assumes at will.

Bilbo learns that Beorn (in his human form) “keeps cattle and horses which are nearly as marvelous as himself. They work for him and talk to him. He does not eat them; neither does he hunt or eat wild animals,” preferring instead the fruits of his impressive apiary. He tends “hives and hives of great fierce bees” and subsists mostly on “cream and honey.” These gentle foodstuffs prove fit provender. They sustain him in his nightly wanderings, during which in ursine shape he “ranges far and wide” in the dark forest surrounding his home.

It is in this home, a “long low wooden house” surrounded by “rows of hives with bell-shaped tops made of straw,” that Bilbo and his companions (thirteen dwarves and the mighty wizard Gandalf) seek shelter after an exhausting run-in with goblins. The honey-loving man-bear shows himself a fine host. Bilbo and his partners in adventure dine on loaves with “masses of butter and honey and clotted cream” by the warm glow of “red beeswax candles.” As they feast, Beorn, in his “deep rolling voice,” regales them with “tales of the wild lands … and especially of the dark and dangerous wood, that lay outstretched far to North and South a day’s ride before them, barring their way to the East, the terrible forest of Mirkwood.”

Such perilous adventures seem as remote as Mirkwood itself in the company of Beorn and his docile family of animals and bees, however, and their guests partake of their hospitality with glad hearts.

Should you also wish to lavish upon unexpected guests similar sweets to those which adorn Beorn’s board, try this recipe for honey cake and preserves from the May 15, 1884 edition of The British Bee Journal and Bee-Keeper’s Adviser. And do be generous with the butter and clotted cream!

Honey 1 quart, 1/2 lb. fresh butter, juice of 2 lemons. Grated nutmeg to taste. Warm sufficiently to soften the butter, and mingle by hard stirring. Mix from 1 1/2 lbs. to 2 lbs. of flour to make a dough stiff enough to roll easily. Beat well with the rolling-pin until the dough is compact. Make into a sheet 1/2 in. thick, cut into cakes with a floured cutter, and bake on slightly buttered tins.

All kinds of fruit made into jam, with honey instead of sugar are nice. For grapes pick from the stem and pack into a jar until it is full, then turn cold honey over them until they are covered well. Seal up without any heat, and keep in a cool place. After a few months they will be found to be delicious.