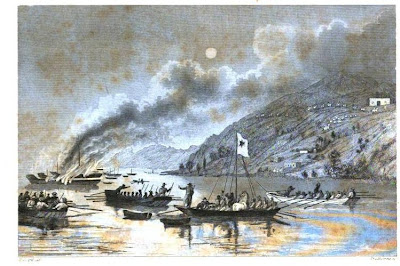 The Mier Expedition was the last and the most disastrous of the raiding expeditions made from Texas into the area south of the Nueces River. Launched in November 1842 by a Texas militia, the attack was initiated partly in hopes of financial gain and partly in retaliation for the Dawson Massacre, during which the Mexican army killed thirty-six Texans.

The resulting battle ended bloodily. Some 650 Mexicans died, and 200 were wounded. The surviving Texans were taken prisoner. A few weeks later the majority of the prisoners escaped into the mountainous Mexican desert, only to be recaptured shortly thereafter. They were moved to El Rancho Salado, where it was agreed that one out of every ten of the 178 prisoners would be executed.

To decide who would die, 159 white beans and seventeen black beans were placed in a pot. The Texans were then blindfolded and, in alphabetical order by name, ordered to draw a bean. The unlucky souls who drew a black bean were allowed to write letters home and then were summarily executed. The event came to be known as the Black Bean Episode, or the Bean Lottery.

While waiting for their chance to pluck a lucky, or unlucky, bean from the pot, the prisoners dined on unappetizing fare.The following passage was sent by a kind reader. It comes from James M. Day’s 1970 book Black Beans and Goose Quills: Literature of the Texas Mier Expedition, and offers a glimpse into the daily fare eaten by the prisoners:

The necessities of life seem to have been foremost in the minds of the prisoners with food, or lack of it, taking precedence. Generally the plan was for the Texans to be provided ingredients which they themselves cooked. Twelve ounces of bread per man per day were issued, but it was made of coarse brown flour more often than not. A pint of weak coffee was dispersed each morning and evening, while the noon meal consisted of twelve ounces of lean beef tripe, “or rather the whole intestines,” which was served with some potatoes. Such was the center of the diet which had few variations.

[A prisoner named] McCutchan had much to write [in his diary] about the food. His overall impression was that their meals were “little of nothing cooked in the worst manner imaginable.” It was fit for neither man nor beast, but still they ate it, not getting enough, “bad as it is.” The meat, he stated, would “stick like glew” if thrown against the wall. Once they received some Irish potatoes mashed in water with very little salt and a great quantity of red pepper. During July, 1844, he devoted five days’ entries to lack of food as follows: “6th—Hard times; Sunday 7th—Nothing, Scarcely to eat; 8th—Nothing to eat with it; 9th—Badly cooked; 10th—Worse than ever.” His classic entry on the meals came on June 12, 1844, when he noted that the dinner was “something better than common.” It consisted of rice, but the dish had been spoiled by a “villainous rat” which had been cooked in it. He concluded that he might “eat it anyway.”

The diet of the Texan prisoners is not one likely to encourage reproduction. And no doubt once they finished their rodent-flavored gruel they dreamed of a gruel more pleasant, such as this recipe for pineapple gruel from an 1895 issue of Out West Magazine.

The Mexicans prepare the corn for atole in much the same way as for tamales; but it is very nice made as follows: Into 5 pints of fast-boiling water sprinkle 11 heaping tablespoons of Indian meal and 1 teaspoonful of salt. Stir well and boil for an hour. Grate one-half of a large pineapple: mix with it one pound of sugar, a small bit of cinnamon, 1 pint of boiling water, stir well and strain into the boiling meal. Stir the mixture well again, pour into a pitcher and serve hot or cold. If cold, it looks pretty in glass custard-cups.