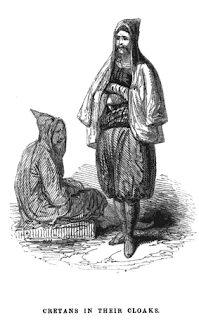 The high and rugged mountains of Crete span its entire length, forming three different ranges. One of these ranges, known as Lefka Ori, is famous for the plateau of Omalos, a circular plain surrounded by green, rounded mountains. For centuries the Omalos plateau was a strategic base for Cretan revolutionaries fighting invading armies.

But the Omalos plateau was also the site of more peaceful activities.

With its remarkably fertile soil, which in the springtime is blanketed in grasses and wild herbs, the Omalos plateau was a favorite place for stockbreeding. Stockbreeders would drive herds of goats and sheep to Omalos’s verdant plains to feast on dittany and oregano, setting up camp for months at a time on the vast, empty stretches. There they lived lonely lives, with only a small camp fire and a few songs remembered from home to keep them company through the long nights on the plateau.

For provisions, the stockbreeders brought rusks–baked by their wives specially for the journey–that they ate with aromatic soups and salads of wild herbs and snails. The rusks were made of roughly milled barley. Their coarse, dry texture guaranteed they would survive the journey into the mountains intact and, once there, stay fresh for months.

Here’s a recipe for a salad of Cretan rusks and fresh vegetables, a traditional dish enjoyed in Crete. Should Cretan rusks not be available your area, substitute day-old bread.

Cut the tomatoes, peppers, onion and cucumbers into slices. Place in a large salad bowl. Mix olive oil, red wine vinegar and lemon juice. Break up Cretan rusks into small pieces. Sprinkle over salad with the olives. Pour dressing over salad and then season with oregano, salt and pepper.