The young woman in Albert Camus’s short story “The Adulterous Woman” finds herself in an Algerian hotel one night, alone with an indifferent and boorish husband.

While he sleeps soundly in bed she quietly leaves the room and walks to a nearby fortress. There she climbs to the fortress’s parapet and gazes out over the vast, seemingly empty desert before her. Suddenly she catches sight of a band of nomads and feels an indescribable sense of longing. “Homeless, cut off from the world,” the young woman observes, “they were a handful wandering over a vast territory.”

Alone upon the parapet, under a sky of glinting stars, she realizes the nomads of the Algerian desert possess a freedom she will never have, that despite being poverty-stricken, they are “free lords of a strange kingdom.” 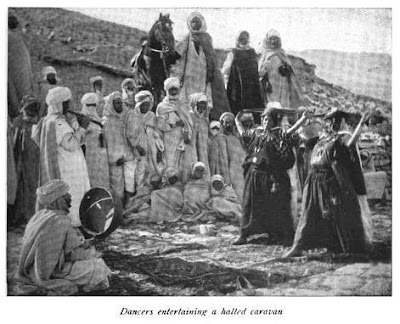 The sadness and longing felt by the woman in Camus’s story isn’t hard to imagine. The tribes of nomads that wandered the deserts of North Africa were indeed lords of a strange and desolate kingdom, where their sovereignty was seldom challenged for 1,300 years.

Otherwise known as Bedouins, they lived austere lives amid sun and sand, wandering from oasis to oasis, trading handicrafts and herding cattle. But despite their difficult lives, they developed a rich oral tradition of poetry and proverbs, as well as a complex culinary history, the ingredients for which they acquired through barter with more sedentary peoples.

The following recipe for spiced tea was, and still is, frequently enjoyed by the Bedouin. It’s a rare oasis in what can otherwise be a desert when it comes to flavorful fare. Experiment with different herbs and spices until you find a recipe that suits your taste.