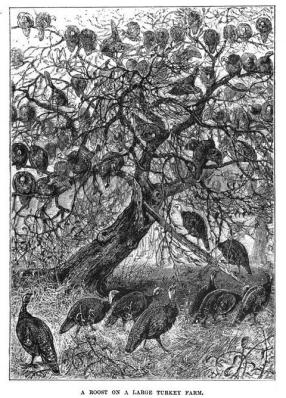 Guests lounge in armchairs and on the sofa, refusing to stir, perhaps even refusing to speak. If they do speak, their conversations are punctuated by hiccups, burps and farts so frequent as to constitute a fugue of digestive functions. They are all equally afflicted in this manner, regardless of age or species: children bulge with ill-advised fourth helpings of pie; the family spaniel, heavy with table scraps, wobbles to her favorite corner.

Such is the typical after-dinner scene on Thanksgiving day, a holiday during which syrupy yams, buttery beans, starchy russets, toothsome peas, and, of course, tender turkey and stuffing conspire to sap the vigor of the heartiest diner.

After prodigious eating, the suggestion of further exertion seems unwise and risks adding grumblings to those already issuing from swollen stomachs – unwise to any other hostess but Mrs. Florence Kingsland, that is, who combated the queasy lassitude of her visitors by devising games for them to play. Her 1904 book, In and Out Door Games, is a compendium of postprandial diversions sure to cheer the soul, aid digestion and dispel “the lethargy that is apt to follow the feast.” Her games are simple but do require some  preparation. One involves hollowing a pumpkin, wreathing it with leaves, counting its seeds, which have been first “preserved, washed, and dried,” before returning them to their original vessel. Guests are then invited to guess their number in a bid to win a questionable prize, “[a]n Indian made of dried figs and raisins, threaded on wire.” 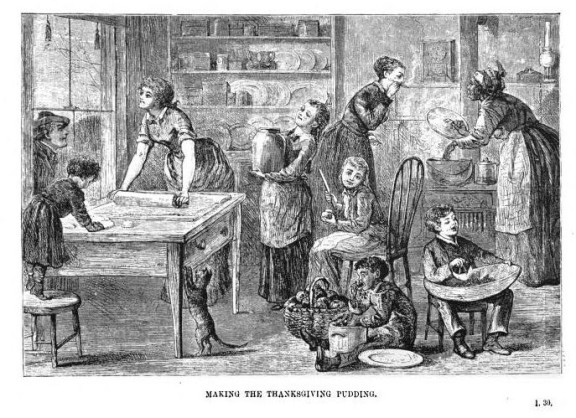 The pumpkinseed game is admittedly labor-intensive, not to mention culturally insensitive. You can always resort to another guessing game that is decidedly less so. It involves giving each guest a card on which to compile a “list of objects suggestive of a feast.” Once this is completed, these cards are collected, shuffled and distributed among the group, who “write their guesses of what dishes are described.” Below is an example of Kingsland’s own:

1. Soup—Imitation reptile.
2. Fish—‟Collect on delivery.”
3. Roasts—The country of the Crescent, and Adam’s wife—served with a sauce of what undid her.
4. Vegetables—Two kinds of toes ne’er found on man or beast; a mild term for stealing; what your heart does.
5. Puddings—What we say to a nuisance, and exactly perpendicular.
6. Pies—An affected gait, and related to a well.
7. Fruit—A kind of shot.

If Mrs. Kingsland happens to have stumped you, you can find the answers below. They appear in order and have attached to them recipes gleaned from various period cookbooks.

Take half a calf’s head, with the skin on; remove the brains. Wash the head in several waters, and let it soak in cold water for an hour. Put it in a saucepan with five quarts of beef stock; let it simmer gently for an hour; remove the scum carefully. Take up the head and let it get cold ; cut the meat from the bones into pieces an inch square, and set them in the ice-box.

Dissolve two ounces of butter in a frying pan; mince a large onion, and fry it in the butter until nicely browned, and add to the stock in which the head was cooked. Return the bones to the stock; simmer the soup, removing the scum until no more rises. Put in a carrot, a turnip, a bunch of parsley, a bouquet of herbs, a dozen outer stalks of celery, two blades of mace and the rind of one lemon, grated; salt and pepper to taste. Boil gently for two hours, and strain the soup through a cloth. Mix three ounces of browned flour with a pint pf the soup; let simmer until it thick.

One and one-half pounds cod, one teacupful bread crumbs, one dessertspoonful chopped parsley, one teaspoonful dripping or butter, one-half teaspoonful salt, a little pepper, one teacupful milk, a little flour, one egg. Wash the cod, take off the fins, or skin it, which is better. A middle cut is preferable, where the opening of the stomach is. Dry the fish well outside and inside. Rub together the bread and dripping; add the parsley, salt and pepper; moisten the whole with the egg beaten up, and fill the opening in the stomach with the mixture. Dust the fish over with a little flour, and put it in a pudding dish; put in one teacupful of milk, and put the butter all over the top in little bits. Put it in the oven to bake about half an hour, basting it with the milk now and again. Fish contains gelatine, fibrine, albumen, and phosphorus. Take out the fish on a hot dish, and pour the sauce round it. This is a most nutritious dish of fish, seeing that all the substance is retained, making it both light and nourishing.

Dress, clean, stuff, and truss a ten-pound turkey…. Place on its side on rack in a drippingpan, rub entire surface with salt, and spread breast, legs, and wings with one-third cup butter, rubbed until creamy and mixed with one-fourth cup flour. Dredge bottom of pan with flour. Place in a hot oven, and when flour on turkey begins to brown, reduce heat, baste with fat in pan. and add two cups boiling water. Continue basting even fifteen minutes until turkey is cooked, which will require about three hours. For basting, use one-half cup butter melted in one-half cup boiling water, and after this is used baste with fat in pan. During cooking turn turkey frequently, that it may brown evenly. If turkey is browning too fast, cover with buttered paper to prevent burning. Remove string and skewers before serving. Garnish with parsley or celery tips.

Dredge the spare ribs lightly with salt and pepper, after having washed well and wiped dry with a coarse towel. Place them in the baking pan and dredge with butter; place them in the oven and cover with a piece of buttered paper. Allow twenty minutes to every pound in cooking. About twenty minutes before serving take off the buttered paper, dredge again, with melted butter, and let them brown nicely. Serve with a garnish of parsley and radishes.
lf it is desired to stuff the spare ribs, have the ribs cracked, crosswise, the entire length, in two places. Put a stuffing, as for roast pig, in the center, or a stuffing made of mashed potatoes and three hard-boiled eggs, mixed thoroughly. Close the ends of the ribs over this, tie well and roast as for a roast pig. Serve with an Apple Sauce or a Sauce Piquante.

Boil a pint and a half of new milk, with four spoonfuls of sago, nicely washed and picked, lemon-peel, cinnamon, and nutmeg; sweeten to taste; then mix four eggs, put a paste round the dish, and bake slowly.
Plum Pudding
Ingredients.—2 lbs. of flour, 1 lb. of currants, 1 lb. of raisins, 1 lb. of suet, 2 eggs, 1 pint of milk, a few slices of candied peel. Mode.—Chop the suet finely; mix it with the flour, currants, stoned raisins, and candied peel; moisten with the well-beaten eggs, and add sufficient milk to make the pudding of the consistency of very thick batter. Put it into a buttered dish, and bake in a good oven from 2 to 2 1/2 hours; turn it out, strew sifted sugar over, and serve. For a very plain pudding, use only half the quantity of fruit, omit the eggs, and substitute milk or water for them. The above ingredients make a large family pudding; for a small one, half the quantity will be found ample; but it must be baked quite lh hour. Time.—Large pudding, 2 to 2 1/2 hours; half the size, 1 hour. Average cost, 2s. 6d. Sufficient for 9 or 10 persons. Seasonable in winter.

Bake 3 large apples, and press them through a sieve to remove skins and cores; grate the rinds from 3 lemons, and add this and the juice of the lemons to the apple pulp; wash, pick over, and bruise in a mortar 1 cup of currants; stone 2 cups of raisins, and cut them in slices. Mix these all well together, chop into them 1 cup of butter (or cocoanut butter), a little salt, 4 cups of brown sugar, 1 tablespoon of candied lemon peel, 1 tablespoon of candied citron, and 1 tablespoon of candied orange peel, all well minced, and after stirring well, add 2 tablespoons of orange peel, cover with wax or brandied paper before the jar is closed, and use for pies in two weeks.

Mix one cup of milk, one cup and a half of dry, steamed and sifted pumpkin, half a cup of sugar, two tablespoons of molasses, one tablespoonful of ginger, one egg slightly beaten, one teaspoonful of cinnamon, and half a teaspoonful of salt. Bake in a pie tin lined with pastry.

5) A bowl of fresh grapes