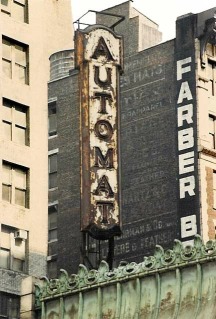 A machine that could serve milk steaming hot or ice-cold, that never spilled a drop and never needed cleaning – such was the dream of German school administrators who were after an innovative way of meeting their pupils’ nutritional needs. In 1903 that dream became reality with the introduction into schools throughout Berlin of the Milch-Automat, a technological wonder that, as revealed in an issue of The Modern Review, subtracted the human element from the dairy-delivery equation. A coin dropped into the machine sent “a waterproof paper cup … down in an opening” to catch a jet of the “very finest quality milk” with ease and exactness. And, true to its promise, the Milch-Automat proved an exceedingly clean machine, flushing itself every so often by “a mechanical process” that kept it “scientifically sanitary.”

These ingenious machines belonged to three classes – hot-food, cold-food, liquid – each indicating certain differences in operation. Customers worked a hot-food machine, for instance, by dropping a coin into it, in exchange for which they received a metal token. Meanwhile, the coin journeyed down a tube that denoted a particular dish. In some subterranean kitchen, a cook took notice of this coin and prepared the appropriate entree, which he then sent up a dumb waiter and down a conveyor to a glass receptacle. This dish the customer freed by inserting his token into a nearby slot. 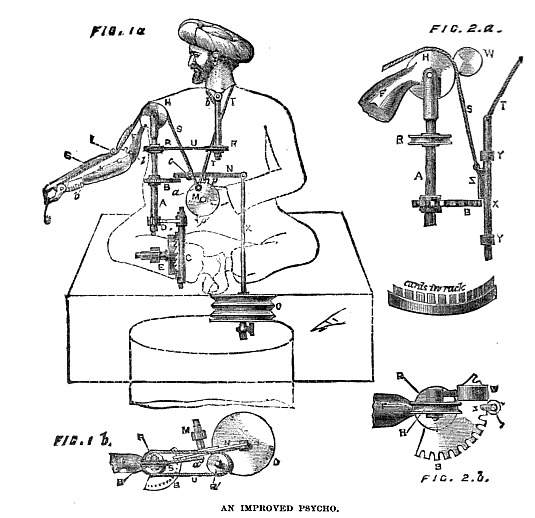 Cold-food automats, on the other hand, were decidedly simpler affairs. Prepared in advance and adequately refrigerated, a cold dish could spend all day attracting the attention of some peckish passer-by. Similarly self-sufficient were the liquid machines, which featured the addition of a self-measuring contrivance that ensured each thirsty customer’s cup was filled exactly with the advertised quantity. 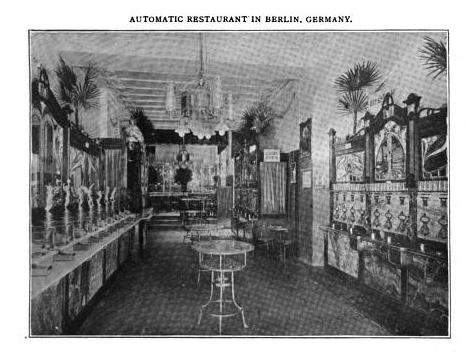 Automat fever soon spread beyond central Europe. A passion for these machines came to infect New York and, in fact, touched off a vogue for so-called “Automat parties.”A typical fête of this sort involved the late-night rental of an automatic restaurant. Theater-goers, club-hoppers and other assorted  night owls would make merry in these hired hot-spots, enjoying their mechanized bounty by pumping cocktails and winching up salads with the drop of a coin.

Automats are a rarity nowadays. But you can still recreate an automat meal. An American visitor to one such establishment in Berlin reported enjoying a lunch of “mutton, potatoes, string beans, Swiss cheese sandwich, sardine sandwich and vanilla ice” – all for 20 cents! These inflationary times make it hard to replicate such a meal at such a price. But a few bucks still allows you to enjoy a Swiss cheese sandwich like those featured in The Up-To-Date Sandwich Book (1909).

Butter thin slices of pumpernickel bread. Between slices put a thin layer of Swiss cheese and leaves of watercress. Cut in long narrow strips. Garnish with an olive.