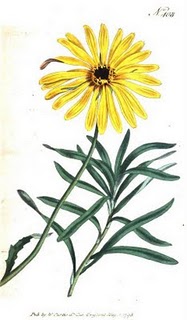 One common flower enjoys an uncommonly storied history. Ancient Romans celebrated its vitality, calling it calendula in honor of its monthly blooms. Buddhists consider it sacred to Maha-devi, her devotees weaving garlands of it as a show of reverence. The Germans call it gelt (or gold-flower), believing it to resemble the coin of the realm. Mexicans call it the flower of death, claiming it to have sprung from soil wet with the blood of natives shed by cupiditous conquistadores. The French call it souci, which derives from the Latin Solsequium and denotes its tendency to expand its bloom to follow the sun’s eastward course, and add it to salad and broths to give them a splash of color. Anglophones dubbed it “marigold,” a corruption of “Mary’s gold,” to reflect the frequency with which it was to be found growing in cottagers’ gardens.

As legends ceded ground to science in modern times the marigold lost nothing of its cachet. The Swedish botanist Linneaus confessed himself delighted to discover that its petals unfold in the morning and close in the afternoon around three o’clock. Though perhaps less taken than Linnaeus with the marigold’s daily habits, early twentieth century health guru George Julius Drews found its nutritional value most impressive. In his 1912 health manual Unfired Food and Thropho-Therapy Drews recommends marigold petals “pulled out the of flower head, chopped, mixed with a few pignolias or chopped walnut and dressed with honey” as a salad whose initially unpleasant odor is quickly forgotten once the dish itself is sampled. Indeed, Drew assures readers that “after the flowers are tasted about three times they will be craved, because their sweet aftertaste is like that of the dandelion flower.” 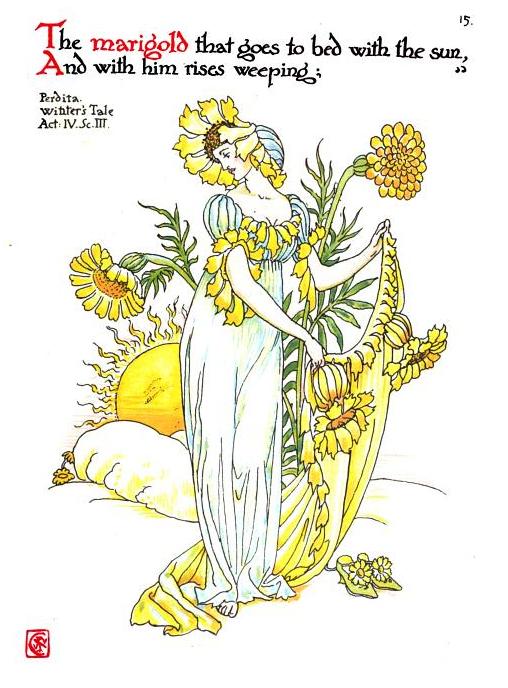 Those unwilling to endure these three requisite tastings can obtain the marigold’s benefits by infusing its petals in vinegar. Marigold vinegar not only has its culinary uses, being found in many Continental poultry and mushroom dishes, but its topical uses as well. Folk wisdom had it that it soothes skin complaints and measle symptoms, and when eaten with salad it fairly eases any ailment. This recipe for marigold vinegar from an 1889 edition of Good Housekeeping offers instructions on how to harness this flower’s power.

Pick off the petals, and press them into a pint measure to get the proper quantity; lay them in the sun for four or five hours, then put them into a quart bottle with a teaspoonful of fine salt and the same quantity of sugar; fill up with white-wine vinegar. In a fortnight it will be ready, and it will keep twelve months or longer.