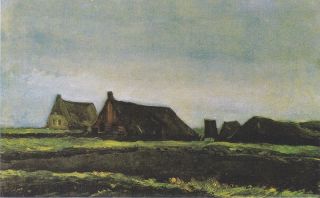 Between 1883 and 1885 Vincent van Gogh lived in Nuenen, a small village in the Brabant district of the Netherlands where his father was the church pastor. There Van Gogh immersed himself in his subject — the lives of local peasants — with a gusto uncommon even among passionate artists.

Not only did he paint the villagers; he lived as they lived, enduring harsh weather, toiling in the fields, partaking of their rustic fare. Indeed, so thoroughly did Van Gogh adopt the folkways of Nuenen that his appearance, speech, and mannerisms changed, much to the alarm of his friends and family.

Yet this alarm ultimately proved unwarranted; Van Gogh drew from his life among the peasants of Nuenen great inspiration, which he bodied forth in a remarkable series of cottage scenes. One of his most famous paintings from the series, The Cottage at Dusk (1885), features the home of the De Groot family, who would eventually figure in another notable work, The Potato Eaters (1885). The Cottage at Dusk shows a straw-roofed building huddled darkly against the evening sky. A single candle burns in the window, a sign of the warmth and humanity within. Outside a lone figure makes her way to the door. One imagines that she is hurrying to dinner, perhaps a thick vegetable stew paired with sour wheaten or rye bread.

For his part, Van Gogh professed an indifference to food. A close acquaintance describes him as sharing family meals “in a strange fashion.” The painter, with “eyes often inflamed from staring at objects in the sun,” would inevitably be “absorbed in studying a newly painted canvas which stood facing him on a chair. With one hand he would shade his half-closed eyes, while eating with the other.” He preferred simple food, and “cut his own bread in thick, heavy slices, which since a child he had preferred eating dry.” But meals were no matter for thought; Van Gogh seemed “hardly conscious of what he ate,” consumed as he was with “the absorbing problem of how to contrast one color with another or how to balance them.”

If you also prefer to eat your bread dry but are not wholly indifferent to flavor, try baking ontbijtkoek, a traditional Dutch spiced rye bread from the 1895 cookbook Recepten van de Haagsche Kookschool. Serve it in thick slices buttered — or plain, as Van Gogh himself would take it.

Preparation: Mix the egg yolks with the sugar for five minutes. In a separate bowl, sift flour and baking soda together. Add to the egg and sugar mixture. Then mix in the remaining ingredients until everything is well incorporated. Place the mixture in a buttered form and bake in a moderate oven until done, or a knife inserted comes out clean.