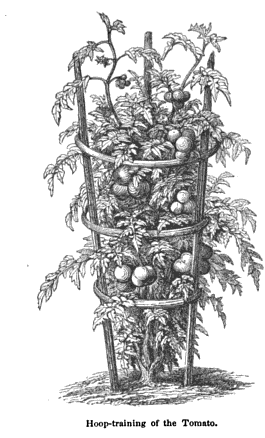 A dinner in which each dish features the humble tomato? Sounds excessive. But that’s exactly what one housewife hosted, according to an 1894 edition of The New England Kitchen Magazine. Known for her “delightful little dinners,” she was eager to prepare one her guests would not soon forget. Only five invitations were sent; her “home was small but dainty and cosey.”  Her guests she chose carefully: “Five friends that she knew to be very fond of tomatoes.”

She omitted no detail when it came to ensuring her party would be a success. Cards were made upon which each guest’s name was “printed across the center in gilt. A small branch representing a tomato plant with a ripe tomato upon it was painted in water colors across the top of the card. The printing and the painting were done by the skillful hand of the hostess.” The day the hostess also selected with care, one “early in the summer … when tomatoes were more of a rarity then they would have been later in the season.”

And the menu? To begin the guests enjoyed a plate of raw tomatoes, followed by tomato soup. Tomato appetizers tuned tongues to taste boiled halibut with tomato sauce. The main course was a fillet of beef with escalloped tomatoes. Stuffed tomatoes were made available to those who wanted more … er … tomatoes. The dishes were savored, the five guests deeming them “a great success.”

Now that summer has arrived, and with it bushels of tomatoes, you too can host such a dinner. Try this recipe for stuffed tomato salad from The New England Cookbook (1912). If you wish to outdo the tomato-loving hostess featured in The New England Kitchen Magazine, serve your tomato salad with tomato pudding and a generous ladleful of tomato soup, all from the 1867 edition of The New England Farmer.

Choose firm ripe tomatoes. Cut off a piece from the top and remove the seed. Stuff with chopped cucumber, green pepper and minced onion thoroughly mixed with mayonnaise. Chill on ice and serve on delicate lettuce leaves.

Pour boiling water on tomatoes; remove the skins. Put in the bottom of the pudding-dish some bread-crumbs, then slice the tomatoes on them, season with sugar, butter, pepper and salt, add some more bread-crumbs, then the sliced tomatoes and seasoning; and if the tomato does not wet the bread-crumbs, add a little water. Then for a small pudding beat up two eggs and pour over the top. Bake about twenty minutes.

Wash, scrape, and cut small the red part of three large carrots, three heads of celery, four large onions, two large turnips: put them into a saucepan, with a teaspoonful of butter, half a pound of lean, new ham; let them stew very gently for an hour; then add three quarts of brown gravy soup and some whole black pepper, with eight or ten ripe tomatoes; let it boil an hour and a half, and pulp it through a sieve; serve it with fried bread cut in dice.