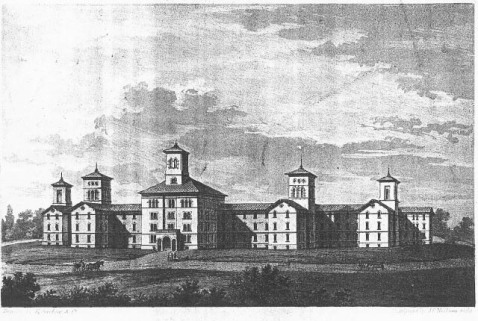 The inmates of the Maryland Insane Hospital, we’re told, were exceedingly well-housed, well -clothed and well-fed. The hospital’s menu was lauded as an example of dietary excellence. According to a 1918 issue of Dietotherapy, inmates enjoyed such gustatory delights as beef tea, lemonade and, when cost did not prohibit it, fish on Fridays.

Such wholesome comestibles were rare in a time that saw egregious abuse of the mentally ill. But Maryland Insane Hospital was one of the most modern institutions of its kind. Now known as the Spring Grove Hospital Center, the hospital was established chiefly as a result of the lifelong individual efforts of Richard Spring Steuart, a Maryland physician and early pioneer in the treatment of mental illness. From its inception the asylum was the very picture of the well-managed institution. In 1884 the chairman of Maryland’s Joint Committee on Public Institutions found the asylum “in excellent condition,” a state which, he wrote, “reflects great credit upon its officers.”

A brief glance at the asylum’s 1918 “Daily Dietary” makes evident its culinary excellence. On Tuesdays inmates enjoyed “oatmeal, meat stew, bread, sirup and coffee” for breakfast; “salt meat, parsnips, greens, beans, bread” for dinner; and a simple dish of “stewed apples and bread” for supper. Vegetables from the asylum farm supplemented these meals, providing what was probably a most welcome variety to a menu that did not change much with the seasons.

Should you want to enjoy a dinner similar to that of the inmates of the Maryland Insane Hospital, this recipe for pork and beans from the 1895 Dr. Clark’s Recipe Book may be just what the doctor ordered. Serve it with stewed parsnips and greens.

Take two pounds of side pork, not too fat nor too lean, to two quarts of marrowfat beans; put the beans to soak the night before you boil them in a gallon of milk-warm water; after breakfast scald and scrape the rind of the pork and put on to boil an hour before putting in the beans; as soon as the beans boil up, pour off the water and put on one gallon of fresh water; boil until quite tender, adding more water if necessary. Great care must be taken that they do not scorch. When nearly as stiff as mashed potatoes, put into a baking dish, score the pork and put in the center. Brown in the oven one hour. If preferred use corned beef instead of pork.