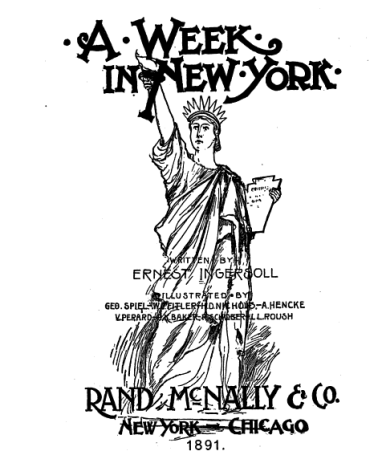 Ernest Ingersoll’s 1891 travel guide A Week in New York counsels souls inexperienced in urban travel in how best to negotiate the labyrinthine boroughs of the Big Apple. In a section entitled “Advice to Inexperienced Travelers,” Ingersoll writes,

An arrival in New York, or any other large city, alone and for the first time, is an ordeal to which many persons look forward with justifiable dread. What shall they do first — whither shall they go — what arrangements are to be made regarding baggage — how shall they find the proper way — how escape mischievous misleading of some sort and unnecessary expenses? These questions occur to many inexperienced travelers; and it is the purpose of this chapter to answer them, as to New York, as explicitly as possible.

Ingersoll does indeed answer these questions, as well as many more. He covers such topics as “Getting About the City,” “Racing and Athletic Sports,” and “The Rivers and Harbor.” He is especially helpful in recommending restaurants to the wary (and likely beleaguered) traveler, writing most lovingly of “a class of restaurants called dairies.” These restaurants, favorites among diners of modest means, “make milk and bread in a great variety of forms the standard nourishment, adding some simple dessert and pastries, and always berries and fruit in season.”

Perhaps the dairies of New York served a simple rice pudding, like this 1891 recipe from the famous Astor House.