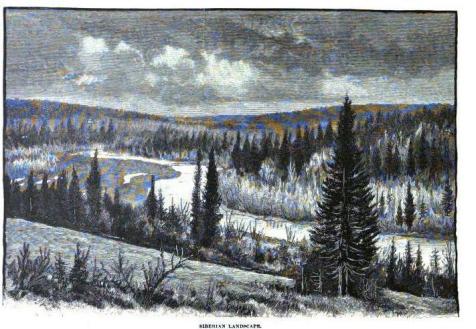 George Kennan and his sled dogs traveled twenty-three days through the bleak, wintry wilderness of Siberia before they reached the tiny village of Anadyrsk. “The short winter day of three hours had long since closed and the night was far advanced,” he writes in his 1870 travel memoir Tent Life in Siberia and Adventures Among the Koraks and Other Tribes in Kamtchatka and Northern Asia, when “we drew near our final destination — the ultima Thule of Russian civilization.” Alerting Kennan to his imminent arrival was the sled dogs’ cheerful barking; he himself was lying listlessly and “nearly buried in heavy furs”on his sled, exhausted from weeks spent wandering the snow-blown steppes.

A crowd of spectators gathered around the weary American adventurer, whose hungry face sporting a beard of three-weeks’ growth and a frost-bitten forehead covered in “long ragged locks” provoked in them a respectful silence. In the center of this “fur-clad group” stood a priest with “long flowing hair and beard, dressed in a voluminous black robe, and holding above his head a long tallow candle which flared wildly in the cold night air.” The priest beckoned Kennan to follow him.

Kennan followed the priest into a small, tidy house. Its floors were carpeted in “soft, dark deer-skins in which one’s feet sank deeply at every step.” A fire blazed in one corner, and a “tiny gilt taper was lighted before a massive gilt shrine opposite the door.” On a small table was laid a meal of vodka, “cabbage-soup, fried cutlets, white bread and butter,” which Kennan shared with the priest and his family.

After this welcome repast Kennan spread out his bedclothes on the floor, undressed himself “for the second time in three weeks,” and retired. “The sensation of sleeping without furs, and with uncovered head,” he writes, “was so strange, that for a long time [I laid] awake, watching the red flickering fire-light on the wall, and enjoying the delicious warmth of soft, fleecy blankets, and the luxury of unconfined limbs and bare feet.”

What dessert Kennan enjoyed during that first meal after three weeks in the wilderness he did not record. Perhaps it was a dish of sweet Siberian crab apples like this one from the 1866 Dictionary of Daily Wants.

Make a rich syrup with sugar, the juice and rind of lemons, a little brandy, and cloves. When this boils throw in the fruit [crab apples], which should be perfectly ripe. Let it simmer for a few minutes, then remove from the fire; and leave it to cool. Boil again, and continue doing so until the crabs become quite soft. Serve cool in the syrup.

Gather the apples while they are still very hard. Remove the eyes, peel them, and put them into a brine of salt and water that will float an egg. Let them stand for six days more. Put them into a jar with a little mace. Boil some double distilled vinegar with sliced horseradish, a sliced nutmeg, some allspice, and a few cloves, and pour it boiling hot upon the apples. When quite cold put a cork into the jar. Boil the vinegar again every alternate day for ten days, and pour it each time boiling hot over the apples. When cold, cork the jar, and tie it down with a bladder. The pickle will not attain perfection till it has lain for three months.