Henry Mayhew, an English social reformer, dramatist and journalist, wrote the groundbreaking survey of the poor London Labour and the London Poor (1851), in which he recorded interviews with beggars, street urchins, costermongers, prostitutes and labourers. In his account, Mayhew supplies the reader with the minutest details about his subjects’ lives, describing their clothes, food, entertainments and how and where they lived. In the preface to the first volume of London Labour (it ran to three volumes), Mayhew writes that he hoped his work “will form, when complete, a cyclopaedia of the industry, the want, and the vice of the great Metropolis.” This undertaking is particularly “curious,” he continues, “because it is the first attempt to publish the history of a people, from the lips of the people themselves — giving a literal description of their labour, their earnings, their trials, and their sufferings, in their own ‘unvarnished’ language; and to portray the condition of their homes and their families by personal observation of the places, and direct communion with the individuals.”

Certainly London Labour and the London Poor is filled with fascinating details about the dour lives of the downtrodden. The book includes detailed illustrations, and the character sketches Mayhew includes vividly bring his subjects to life.

Perhaps the most intriguing section of London Labour and the London Poor discusses the lives of the costermongers — street sellers of food. The costermongers in the poorer sections of London sold a vast array of wares — potatoes, ham sandwiches, oranges and nuts, watercress, hot green peas and sheep trotters being just a few of the delicacies offered by them. But their delicacies were not as savory as they seem: Mayhew writes that the costermongers often played tricks on their customers, adulterating their wares in unsavory ways. He reports that the “more honest costermongers will throw away fish when it is unfit for consumption; less scrupulous dealers, however, only throw away what is utterly unsaleable; but none of them fling away the dead eels, though their prejudice against such dead fish prevents their indulging in eel pies.” “The dead eels,” Mayhew continues, “are mixed with the living often in the proportion of 20 lbs dead to 5 lbs alive, equal quantities of each being accounted very fair dealing.” After all, as a street fish dealer said to Mayhew, “I don’t know why dead eels should be objected to. The aristocrats don’t object to them. Nearly all fish is dead before it’s cooked and why not eels?” 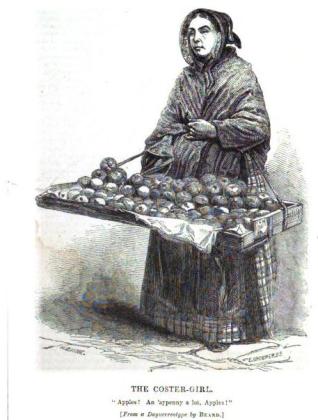 Should you decide to make eel pie, do your guests and family a favor and ensure that your eels are fresh — despite the street fish dealer’s words of wisdom, dead eels are less than appetizing! Below is a recipe for both eel pie and fish pie, as eels are seldom found in markets nowadays. It comes from The Illustrated London Cookery Book (1852), which was a popular source of tasty and interesting dishes for the nineteenth-century cook. Use your favorite recipe for the pie crust, and make sure to use fresh herbs when seasoning the fish, which should have firm, white flesh. Add any number of vegetables to the pie — peas, carrots and onions would all prove delicious.

Cut middling size eels into lengths of about three inches after skinning them. Mix together pepper, salt, a little chopped parsley, and mushrooms. Lay your fish into the dish and a few bits of butter and a little second stock and a few drops of essence of anchovies.

This pie may be made of any fish salmon, pike, tench, eel, or any other. Scale your fish and cut it into pieces. Line your pie dish with a good crust. Put in the fish with a bunch of sweet herbs, a little salt, some bruised spices, and a layer of butter on the top. Put on the crust and bake for an hour and a half. When done remove the fat and put in a vegetable ragout made thus: stir a little butter and flour over the fire until a pale brown, moisten with half a pint of sherry, some soup maigre [stock], add a few mushrooms, a little salt, and a bunch of herbs. Let it boil half an hour, add the soft roes of carp parboiled, stew a quarter of an hour and then put the ragout into the pies. Any vegetable ragout may be used.