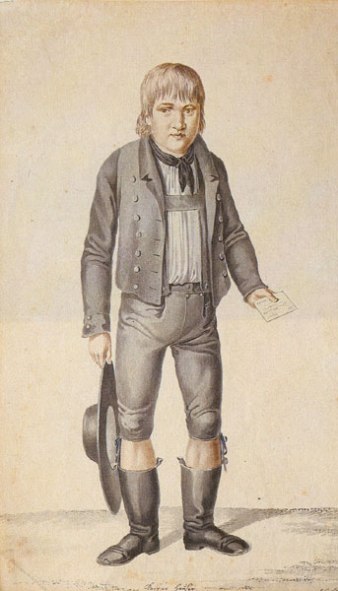 On the morning of May 26, 1828 a young boy, not more than sixteen, wandered into the busy town of Nuremberg, Germany. He was wearing a pair of ill-fitting boots, and he carried a small wooden horse with wheels. He could barely talk.

His name was Kaspar Hauser, and his appearance in Nuremberg that spring morning remains a mystery. Some guess that he was the lost prince of Baden, others that he was an impostor seeking attention. Kaspar was able to share only a scant few details about his previous life; it seems he grew up in a darkened cell, never glimpsing the light of day or breathing fresh air. The only human he had contact with was a mysterious man who brought him bread and water–the only food he ate during his captivity.

Despite his strangely sad past, Kaspar amazed the citizens of Nuremberg with his astute memory and fervent curiosity. His temperament was sweet, though he was said to be given to telling lies, and he quickly took to the daily drawing and music lessons given by his caretaker. But on the morning of December 14, 1833 he was fatally stabbed by an unknown assailant and died a few days later. A monument was erected in his honor, on which was written, “Here a mysterious one was killed in a mysterious manner.”

In honor of Kaspar’s austere diet, the Kitchen presents a recipe for a sourdough bread much like the German breads baked during Kaspar Hauser’s time. Serve it with sweet butter and cheese, or, if you wish to be more like Kaspar, eat it plain, with only a cup of water to wash it down.

Mix all the ingredients together in a bowl until dough is smooth and firm. Place dough in fridge overnight. Take out the next day, shape and place in a cast iron pot. Let rise three to five hours, or until doubled in size. Put in a cold oven and turn heat to 425 degrees F. Bake for 40 minutes. After 40 minutes, remove lid and bake for another 20 minutes or until the crust is a deep brown.