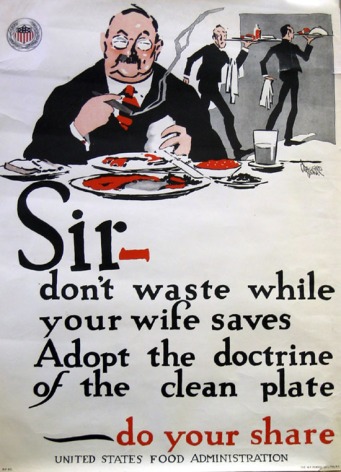 Here’s another recipe from Mary Swartz Rose‘s Everyday Foods in War Time (1918) for a beef and bean stew. In her book, Swartz acknowledges that beef is not the most fitting repast for a time marked by dour wartime austerity and reminds the reader that it does represent an unnecessary expense and should be seen as somewhat of a luxury. “A pound of beef,” she writes, “will require the consumption by the animal of some fourteen pounds of grain.” This pound of beef will furnish “perhaps 1,200 calories, while the grain consumed will represent over 20,000 calories.” Foods like milk and grains are far more economical, Swartz writes, and do not strain the digestion as much as meat.

But there are economical meat dishes, Swartz continues, and they tend to feature meat as a flavoring rather than the entire substance of the meal. Swartz shares her delightful recipe for beef and bean stew, which uses beans as a tasty meat extender, as an example of such a dish. The recipe is copied below. Serve Swartz’s stew with a hearty peasant bread and a green salad.