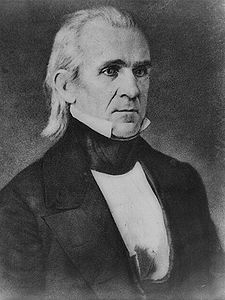 James Knox Polk, Democrat and eleventh president of the United States (1845-1849), served as governor of Tennessee before ascending to the nation’s highest office. A dynamic leader, he oversaw the successful Mexican-American War. Despite the wave of popularity he enjoyed as a result of this war’s successful prosecution, he refused to seek a second term, and shortly after completing his first and only term he died of cholera.

Polk was born in a simple log cabin in Mecklenburg County. His father was a farmer frugal in his habits, but of a disposition kind and generous. As the oldest of ten children, Polk had to assume a great deal of responsibility for his siblings. Yet he managed to find time for his studies. When his family moved to the banks of the Cumberland River in Tennessee, Polk came under the tutelage of Rev. Dr. Henderson at the Academy of Murfreesburg, and in the autumn of 1815 he entered the University of North Carolina, from which he graduated in 1818 with highest honors.

A dignified austerity marked Polk’s term in office. Intent on eliminating the custom of dueling, which, recall, sped Alexander Hamilton to his long home, Polk quickly secured the passage of a law banning this barbaric remnant of the past, as he considered it. His wife, Sarah Childress Polk, helped him in these endeavors. She was a strict Presbyterian, plain of looks but charmingly intelligent, who quickly changed the image of the President’s home, initiating bans on drinking, dancing, card playing and fancy dining.

Here’s The Heritage Cook Book‘s traditional recipe for laplands, small muffin-like biscuits that were popular at the First Family’s austere table. Serve them with butter and jam.