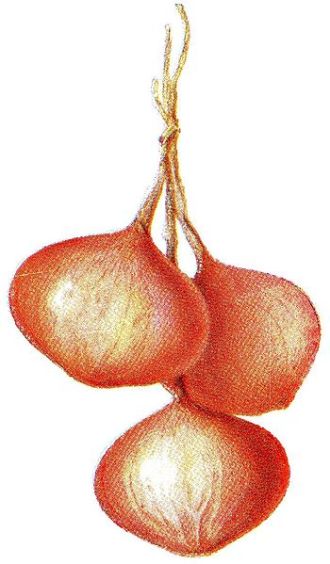 The onion traces its humble origins to Western and Central Asia, where it was first cultivated. It quickly spread in varieties big, small, mild and tart to Europe and America. Massachusetts could by 1875 boast of being a leading state in onion cultivation, with over one thousand acres devoted to the crop.

Cheap and widely available, the onion was consumed with gusto by the peasantry and working classes. An austere meal of watermelon, raw onion and black bread satisfied many a Southern European workingman, who preferred the onion’s pungency to cheese’s comparative mildness, which was favored by his British counterpart.

Don Quixote’s erstwhile companion Sancho Panza even preferred a meal of raw onion and bread to more substantial fare: “To tell you the truth,” he confesses, “what I eat in my corner, without compliment or ceremonies, though it were nothing but bread and an onion, relishes better than turkey at other folk’s table, where I am forced to chew leisurely, drink little, wipe my mouth often, and can neither sneeze nor cough when I have the mind.”

The onion was considered more than just a lunchtime tidbit; it was also valued for its medicinal properties. Onions were used as protection against winter colds and as a balm for snakebites and flesh wounds. For the insomniac a few small onions eaten before bed were supposed to prove soothingly soporific, and a patch of them planted near one’s house could protect against plague. Even Napoleon consumed onions by the barrel-full to increase his military prowess.

Here’s a 1902 recipe for potato and onion pie, a simple dish favored by the British working classes. Replace the meat with a cheese of your choice for a vegetarian dish.

Take some peeled and finely-sliced onions and potatoes, allowing half a pound of onions to one pound of raw potatoes; fry the onions in a butter or drippings till a pale golden color, and season them with pepper and salt. Take three ounces of finely chopped beef suet [optional], three ounces of chopped lean ham or bacon, the same of finely-chopped cooked chicken, and mix this with a dessert spoon of finely-chopped parsley. Have a pie dish slightly greased, arranged the potatoes and onions alternately in this, sprinkle over each layer chopped meat, and continue these layers until they form quite a pile; fill up the dish with good light gravy or stock, wet the edges of the dish with cold water and put a strip of puff pastry the size of the rim round the edges. Wet the upper side of this, then cover the whole of the pie with puff pastry about half an inch thick; press this well into the band of the pastry. Trim the edges evenly, brush over with whole raw beaten-up egg, mark in any pretty designs with a small knife, scallop the edges, stand the pie in a baking tin, pour water in this to about an inch in depth, and bake the pie in a moderate over (350 degrees F.) for one and a half to two hours.