The Food of a Younger Land: A Portrait of American Food Before the National Highway System, Before Chain Restaurants, and Before Frozen Food, When the Nation’s Food Was Seasonal
by Mark Kurlansky
Riverhead, 416 pp. ISBN 1594488657

“No American seems yet to have mastered the art of making a perfect guide book,” complained a reviewer in the June 4, 1893 edition of The New York Times. What made this deficiency apparent was the fact that the book under review, a recently published Baedeker guide to travel in the United States, was written by an Englishman. The guide’s “faithful and accurate description” of the country as seen by “unprejudiced foreign eyes,” were virtues that all “sensible Americans” could appreciate, the reviewer admitted, but they could not conceal the guide’s sketchy, terse quality. The reviewer took particular umbrage with an opening piece on American politics, which he considered “scarcely a substitute for a complete history of the United States.” And the text’s many Britishisms compounded this shortcoming; the reviewer spent many column-inches glossing them.

The desire to produce American-made American guidebooks led Works Progress Administration organizer Katherine Kellock to head a project that commissioned guidebooks for each of the then forty-eight states. In the 1930s she enlisted the help of state residents, many of whom had local ties stretching back generations. Colonial history and covered bridges became subjects lovingly rendered by an old New England family. Frontier fracases and the elusive Bigfoot sprang to life from the pen of renowned Idaho author Vardis Fisher.

As the American Guide Series neared completion, Kellock decided to begin a new project. Called America Eats, this endeavor, organized much like the American Guide Series, set out to document the eating traditions of various regions in the United States. America Eats enlisted the help of 6,686 correspondents who were asked to document the culinary idiosyncrasies of their home states.

Unfortunately, the outbreak of the Second World War stopped the project. The partial result was, however, complete enough eventually to serve as the subject of Mark Kurlansky’s The Food of a Younger Land: A Portrait of American Food Before the National Highway System, Before Chain Restaurants, and Before Frozen Food, When the Nation’s Food Was Seasonal, which contains “not always the best but the most interesting” pieces from America Eats, Kurlansky writes.

When he first opened the files of America Eats, Kurlansky “felt as though [he] had accidentally stumbled back into prewar America.” It is indeed difficult not to experience a dizzying nostalgia upon reading the selections from America Eats. Many are nothing short of entrancing: A New Mexico correspondent writes about la merienda, a mid-afternoon meal of fried beans and smoked kid which sun-weary field hands enjoy in the cool bank of an arroyo. From Pennsylvania we learn of the moist and odorous workings of a mushroom farm. A correspondent from California waxes poetic over the annual grunion fry, where the slippery quicksilver bodies of a million mating fish are scooped from the beach and tossed into boiling vats of oil. 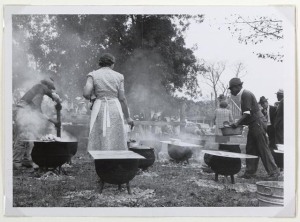 Despite these and many more similar vignettes, one finishes the book with an insatiable desire for even more glimpses of an America that has long been swept into history’s dustbin. In this respect, The Food of a Younger Land represents more a delectable array of hors d’oeuvres than a sumptuous banquet. This may, however, reflect more the reader’s condition than the book’s quality. For Kurlansky reminds us that we have betrayed the traditions described by the correspondents of America Eats. “It is terrifying,” he observes, “to see how much we have lost in seventy years.” Starved of such tradition, the reader can only hungrily wish for more than the already ample bounty of Kurlansky’s book.

Reader’s appetite aside, The Food of a Younger Land offers an important lesson: that the bonds of family and community are forged through simple communal pleasures. A neighborhood picnic where folks share stories and food does more to preserve the traditions of a community and strengthen its social fabric than an entire army of archivists.

Below is a recipe from The Food of a Younger Land for “Depression Cake.” In a delightful and engaging vignette, a correspondent describes the plight of a young woman named Ethel who, when faced with a cupboard bare of butter and milk on the Fourth of July, developed a recipe for a cake that used what few ingredients were available. She was, at first, trepidatious–the batter seemed “a volcanic mass in her mixing bowl.” But once out of the oven, the cake proved a success, smelling of “Old World spices” and baked a perfect brown.

In a large bowl mix the raisin juice, baking soda, spices and drippings. In a separate bowl, mix flour, sugar, baking powder and salt together. Add to the raisin juice mixture. Mix together and then add vanilla. Place in a greased loaf pan and bake for an hour at 350 degrees F.