The Oregon Trail stretched from the Missouri River to the Oregon territory. During the Great Migration of 1843, settlers from as far as New England traveled its two thousand miles, hoping for a new, more prosperous life in the Oregon territory. They traveled in convoys, and long lines of wagons pulled by weary oxen dotted the trail in an otherwise desolate landscape.

A high degree of organization was necessary during the journey. Danger lurked around every corner: wild animals, famine, hostile natives and unpredictable weather all threatened to disrupt the convoy’s westward progress. The convoy’s leader, usually an official elected by democratic vote at the beginning of the journey, decided on the safest camping sites and kept order among the convoy’s many families.

At night the convoys stopped to rest. Camp fires festooned with cauldrons and pots burned brightly against the dark night of the American wilderness as the settlers gathered to prepare their suppers. The meals were meager, but filling — salt pork, flour, beans and cornmeal made up the bulk of the provisions on the Oregon Trail. When cream was available, the settlers churned it into butter in the wagons as they rocked along their rough, uneven route. 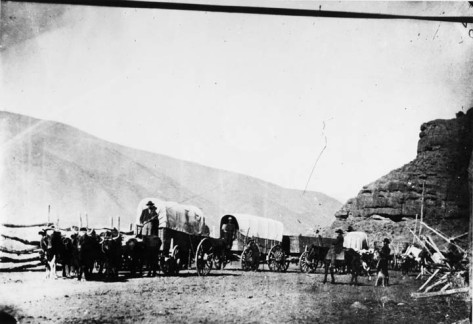 Wagons along the Oregon Trail

The settlers frequently mixed their fresh-churned butter with molasses and eggs, creating a delightful, spicy spread for cornbread, another food popular on the trail. Here’s a recipe for the molasses butter enjoyed on the Oregon Trail. Serve it with a hearty cornbread or another variety of quick bread, like banana or pumpkin.

Mix molasses, butter, nutmeg, soda and a pinch of salt in heavy saucepan. Bring to a boil over low heat. Beat eggs in a separate bowl. Stir moderate amount of hot mixture into eggs. Return the egg mixture to the saucepan. Cook and stir till thick, about one minute. Chill. Makes 1 1/2 cups.

One thought on “On the Oregon Trail: Molasses Butter”